5G is becoming mainstream in telecommunication, but how to deliver the vision of a diversity of new applications?

5G is fast becoming part of modern telecommunication networks. The 3GPP organisation has completed the full 5G specification, telecom operators are building 5G networks and 5G is widely supported in the latest crop of smartphones. But acquiring spectrum for 5G and deploying the technology is expensive and the business case remains unclear. 5G is designed to support an astonishingly wide range of new applications beyond traditional telecoms and, in many cases, this is the answer to pay the bills. But progress is slow taking these new 5G applications forward.

New mobile generations emerge approximately every 10 years starting with the 1G analogue Nordic Mobile Telephone system in 1984. 2G was the first digital system providing low cost telephony and text messaging. Digital transmission was expanded with 3G from 2001, but data rates were limited. This improved in 2009 with 4G, leading to the current situation where data
dominates, and telephony is just one of many applications. 5G provides even faster data transmission than 4G along with shorter latency (delay) and better support in high density areas. But 5G costs are high and the business case is questionable, if it simply provides more of the same to smartphone users – 4G already provides most of what is needed. The answer surely lies in the multiplicity of new applications 5G is designed to support – from connected cars to factories and from emergency services to smart meters. But progress taking these new applications forward is slow. This paper examines the issues leading to this situation and suggests some solutions.

These features are can be considered to target a triangle of applications as illustrated below. 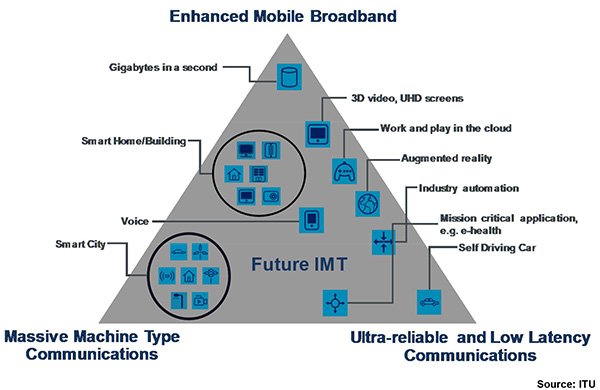 Key measures in the 5G specification to achieve these capabilities are:

Spectrum – Spectrum will be in two classes – sub 6GHz as with existing cellular systems and above 6GHz, including extending into millimetre-wave bands. Maximum user bandwidths are extended to 100MHz below 6GHz and 1GHz above 6GHz.

SDN and NFV – Software defied networking and network defined functionality enable functionality to be distributed as required for flexibility and scalability in functions such as IoT.

Network slicing – Network slicing down to the physical layer along with lightweight protocols will enable the system to be configured for compact low-cost battery powered terminals along with massive connectivity and good coverage.

Three recent events capture the status of 5G. Release 16 of the 3GPP 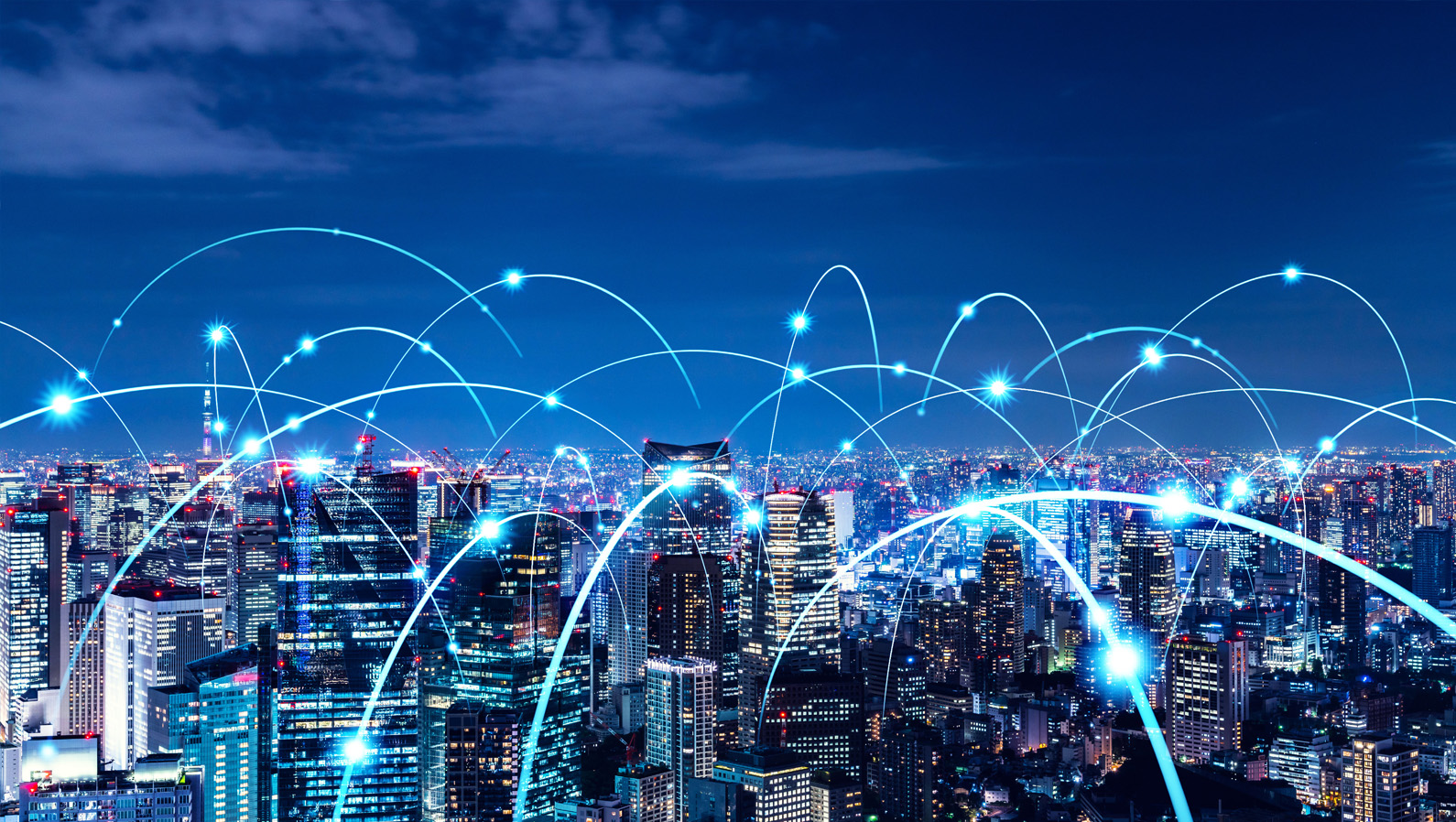 specification for 5G was completed in July 2020. This version of 5G defines a full standalone version of the system. This is contrast to early deployments of 5G where the 5G New Radio (NR) is piggybacked onto existing 4G network infrastructure. Release 16 is also the version 3GPP has submitted to the ITU for approval to meet its IMT2020 specification. In earlier mobile generations, multiple competing systems were submitted to ITU for approval. Nowadays 3GPP dominates and this process is somewhat of a formality – nobody disputes 3GPP as the creator and custodian of 5G. This latest version of the 3GPP specification is notable for the features it includes to support multiple vertical industry applications including:

On 15 January 2021, the FCC announced the closure of a spectrum auction of 280MHz of CBand spectrum between 3.7GHz and 3.98GHz intended for 5G usage. The auction raised a
record sum exceeding $80bn. The majority of the spectrum was acquired by the three national
operators, T-Mobile, Verizon and AT&T, although other bidders were also successful including
satellite TV and cable companies.
At first sight, this may appear a classic case of over bidding for the latest technology, resulting in
unsustainable debts going forward. However, the bids may be justified since:

The world’s largest consumer electronics technology event, normally held in Las Vegas, was virtual for the first time in January 2021 due to the pandemic. 5G was a key theme with several manufacturers promoting 5G phones. Unlike 2020, where the focus was on high-end smartphones, manufactures such as Motorola announced budget devices for 5G and Qualcomm introduced the Snapdragon 480 for low cost 5G terminals. There were also announcements on 5G in devices other than smartphones, including laptops, home routers and hotspot solutions.

There were many glossy presentations on how 5G will be used in applications such as in smart cities, factories and in-vehicle applications, but there was a notable absence of real technology solutions to support this.

What are the Use Cases?

To date, four 5G use cases have been identified:

Better mobile broadband – Faster speeds and greater density to support applications such as live TV, video streaming and augmented reality. An issue here, is that surveys show mobile subscribers are unwilling to pay for these improvements. Indeed, in a market where prices for mobile broadband are falling, it may be the best that can be achieved is to maintain existing revenues in return for a better service.

Internet of Things – This area has developed steadily for several years and there are undoubtedly many and varied applications for large numbers of connected devices – smart meters, domestic appliances, asset tracking, etc. But progress has been slower than expected. 5G brings a step-change in the technology available, but will it be enough for IoT to finally take off? For one thing, there are competing technologies such as LoRa and Zigbee. An effective way of delivering these applications is also needed since Cisco report some 75% of IoT projects fail.

Mission-critical systems – Applications here include self-driving cars, mobile health systems, factory automation and emergency services. Low latency is important in many of these applications as is the ability to create in effect a separate network for critical services using network slicing. Emergency services such as police, ambulance and fire services currently use antiquated communication systems and could be an early beneficiary of these new capabilities.

Fixed wireless access – This is applicable in areas where fixed coverage is poor owing to delays rolling out fibre to the home. For example, Verizon in the US provide a 5G fixed access service with speeds up to 1Gbps (typical 300Mbps), especially for more rural areas. Interestingly, improving coverage is not a major focus for 5G despite this being a key concern for
consumers. For example, a study in the UK found that 2% of roads have no mobile coverage and 18% have no data coverage.

5G is a technological marvel – it combines a multitude of leading-edge technologies and offers a step change in capabilities over 4G LTE. As illustrated by the recent 5G spectrum auction in the US, operators are willing to invest heavily to secure their position in 5G. And yet it seems unlikely they will be able to extract much more revenue from their customers to pay for the spectrum and infrastructure needed. So where will the revenue needed to justify the investment come from?

Fortunately, the full 5G system specified in July 2020 is designed to support an astonishingly wide range of applications. The intention is to move beyond just providing mobile phone and internet access, and instead target everything from self-driving cars to automated factories and from smart refrigerators to digital healthcare.

But as yet, there is not much evidence these new applications are taking off as demonstrated at the recent CES 2021 show. Also, the experience from 4G, which started the move into new applications, is not encouraging. In practice, 4G has become almost exclusively a “better telecommunication” system. This is fine since 4G is a big step forward from 3G for this purpose. But this trick will not work for 5G where the costs are higher and the need for a “still better telecommunication system” is just not there since 4G works just fine in most cases.

So, to succeed, 5G will have to move into new application domains and yet there is little evidence this is starting to happen. In our view, it is not the technology but the industry structure that is preventing this transition. Experience of mobile operators exploiting applications beyond telecommunications is not good. They have the technical knowledge but are not sufficiently fleet of foot and do not understand the relevant industry verticals. In contrast, players in industry verticals do not understand the intricacies of a system as complex as 5G.

We believe a multifaceted solution is needed involving a combination of training, organisational change and perhaps structural changes such as operators incubating and spinning off new businesses. There is also a place for independent consulting and technology companies, such as Mobius Consulting, to bridge the gap between telecom and application sectors.